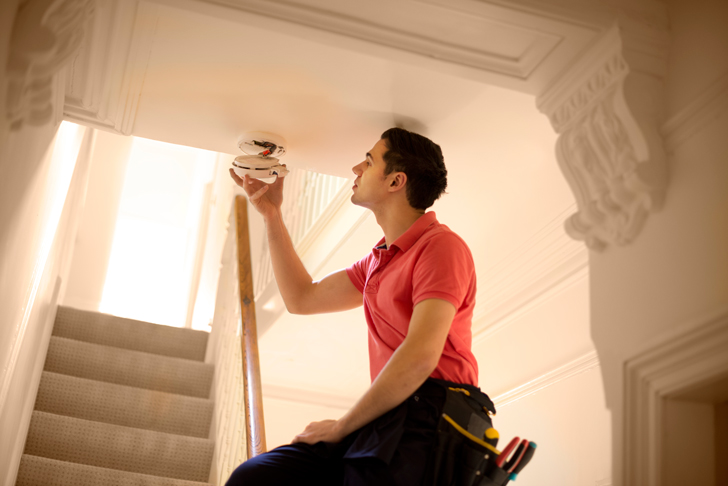 Posted by durbinsl in Uncategorised

Landlords will be required by law to install working smoke and carbon monoxide alarms in their properties, under measures announced by Housing Minister Brandon Lewis today (11 March 2015).

The move will help prevent up to 26 deaths and 670 injuries a year.

The measure is expected to take effect from October 2015, and comes with strong support after a consultation on property condition in the private rented sector.

England’s 46 fire and rescue authorities are expected to support private landlords in their own areas to meet their new responsibilities with the provision of free alarms, with grant funding from government.

This is part of wider government moves to ensure there are sufficient measures in place to protect public safety, while at the same time avoiding regulation which would push up rents and restrict the supply of homes, limiting choice for tenants.

The vast majority of landlords offer a good service and have installed smoke alarms in their homes, but I’m changing the law to ensure every tenant can be given this important protection.

But with working smoke alarms providing the vital seconds needed to escape a fire, I urge all tenants to make sure they regularly test their alarms to ensure they work when it counts. Testing regularly remains the tenant’s responsibility.

We’re determined to create a bigger, better and safer private rented sector – a key part of that is to ensure the safety of tenants with fire prevention and carbon monoxide warning.

People are at least 4 times more likely to die in a fire in the home if there’s no working smoke alarm.

That’s why we are proposing changes to the law that would require landlords to install working smoke alarms in their properties so tenants can give their families and those they care about a better chance of escaping a fire.

Ensuring the safety of tenants
Other measures to support the private rented sector include investing £1 billion in building newly-built homes specifically for private rent, giving tenants support against rogue landlords and publishing a How to rent guide so tenants and landlords alike are aware of their rights and responsibilities.

The proposed changes to the law would require landlords to install smoke alarms on every floor of their property, and test them at the start of every tenancy.

Landlords would also need to install carbon monoxide alarms in high risk rooms – such as those where a solid fuel heating system is installed.

Those who fail to install smoke and carbon monoxide alarms would face sanctions and could face up to a £5,000 civil penalty.

This would bring private rented properties into line with existing building regulations that already require newly-built homes to have hard-wired smoke alarms installed.

And it’s in line with other measures the government has taken to improve standards in the private rented sector, without wrapping the industry up in red tape.

Further information
New regulations will be laid in Parliament to require landlords to install smoke and carbon monoxide alarms in their properties, and are expected to come into force, subject to Parliamentary approval, on 10 October 2015.

The allocation of funding to fire and rescue authorities to offer free smoke and carbon monoxide alarms to local landlords will be announced shortly.

The government’s Fire Kills campaign will be encouraging people to test their smoke alarms when they change their clocks to British Summer Time. The ‘Tick Tock Test’ campaign will run on radio, online and in the press from 16 to 29 March 2015.